Everything we perceive, or perceive to know is based upon what our organs can sense of the environment.

As organisms evolved from past to present via Successful Adaptation, advantages of successive evolutions need only be suited to their immediate environment and even then only as much as necessary.

A bacterium may exist in agar but know little, if anything, of the chemical composition of agar in the same way a bear does not know why water is fluid or the Earth is round – neither organism needs to know these things in order to thrive. Evolution and ecology provide many examples of organisms suited for only a very small, and/or unique area.

It is a common, natural result of evolution.

We are also a result of this process. Needing to know how and why Time functions exactly is not necessary in order for us to thrive. We just need to know a bit – past, present and future exist and we can measure distances between them through our innate understanding and use of Time.

Before examining some basic concepts about Time and perhaps in the process come to an intrinsic understanding of the above, we need first try and find aspects of Time that are understandable and relatable to whatever frames of reference we utilize.

One of the most important concepts is the idea that a static, stationary unmoving object does not exist in Time. The most basic element of Time will always have movement intrinsic as part of itself.

This is one of those telling things about our own innate perceptions. When we look at a brick or a wall or rock or dime on the sidewalk, we think oh look, there’s some thing. It doesn’t move, it just sits there and never changes without some sort of erosion event, for example. To our minds it is a single thing, a unit, a static stationary object. In truth they are not – electrons flit unseen along with a myriad of forces, elements, atoms and whatnot. It’s all simply unknown to our naked eyes.

It is necessary then to realize that a single unit of Time (4d) will not look or act like a single unit in space (3d). It will always appear to be moving.

Some nice mathematicians have started delving into the 4d world and have provided beginning steps in our understanding of Time and dimensional perceptions.

Below is what could be called a single unit of Time or a Node in Time or an aspect of the basic geometry of Time.

It may not be entirely accurate but it does show the basic movement inherent in any fourth dimensional geometry. My personal take on the Nodes is based more on a moving torus-type geometry but it does allow us to comprehend what is happening visually.

It is enough to see the idea of a Churn Rate, the rate at which an organism requires to perceive and integrate or retrieve information from the Time environment.

It is called the Octacube and was created by Adrian Ocneanu. Let me say I have had no contact with Dr. Ocneanu and certainly cannot say he supports or is even aware Functions of Nature in any way.
https://youtu.be/pVT8iVsszWk

Dr. Ocneanu has also provided the world with a gem of a sculpture below with these rather apt words here: 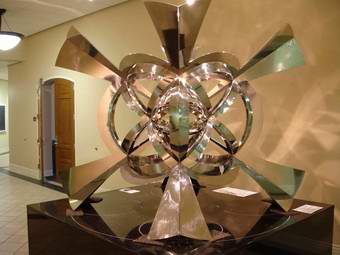 Unfortunately, humans cannot process information in four dimensions directly because we don’t see the universe that way. Although mathematicians can work with a fourth dimension abstractly by adding a fourth coordinate to the three that we use to describe a point in space, a fourth spatial dimension is difficult to visualize. For that, models are needed.

It would be continually moving as well. Imagine if you will, the above moving sculpture ‘surfaces’, being composed of other parts also moving, deforming, reforming, and again.

An organism only need be Successfully Adapted to its immediate environment. Nothing else is necessary. We may think ourselves supreme as one of the first organisms to sense and manipulate the Time environment to our degree out of the billions of years of life on this planet but our abilities are extremely new from an evolutionary standpoint.

Like all new abilities expressed by organisms our ability with Time is primitive. Compare human ability to create buildings for example, versus that of a spider creating a trapdoor or web. We are more like the spider just happy to have a place to stay warm and trap those sucker insects versus super-beings controlling all space and time.

Because of this our best indicators of what exactly the Time environment ‘looks’ like come from Mathematicians as above.

Regretfully human evolution has left us at an intermediate form in nature where we must put everything we experience and describe in terms of how they look to our so very long ago evolved eyes. It is a primitive sensory methodology but one that is fantastic for animals on Earth surrounded by more primitive organisms.

That moving structure above, that sort of maths needs to be applied to everything and I suspect some of those so-called ‘strange’ or ‘freaky ‘results from quantum experiments could simply be resolved by knowing the exact nature of a 4D environment.

The structure of Time has been glimpsed by multiple cultures on Earth through recorded history and there will be another page coming with some of this foreshadowing. For the most part we can imagine those 6 forms Dr. Ocneanu mentions above moving constantly intermingling with each other similarly to the moving structure above.

It is but a glimpse of a shadow but one that is crucial to consciousness.

The Churn Rate determines how an organism perceives Time, the relative duration of events in Time as experienced by the organism when referring to consciousness. You experience this as not only how fast you can think but how fast sensory data can be taken in from the environment and integrated with other sensory data.

Based upon casual observation and certainly something that would need further examination, there may be a correlation between physical size and Churn Rate, thus opening up one of the avenues of exploration for correlating our biological processes to Time as a fundamental construct or element of our Universe.

Memory requires a churn or many churns to retrieve events from the past to make them present in your mind.

Memories are not stored on a “hard-drive” of the brain – there is simply is no such thing in our biology and ideas relating to this are more in line with homunculi than reality.

Instead, memories are the ability to go back in Time and review that moment or moments of the past and bring them forward into the present. A “simple” manipulation of Time.

For this to occur, an organism must be able to adhere to Time much in the same way feet adhere to the ground, for example. One cannot churn the past to the present (and the future) if one cannot adhere to at least some part of Time in the first place.

The different rates at which Time is perceived can be and has been altered by humans using biochemical means.

Adhering to the Time elements of the environment requires a method for organisms to both stick too and then remove themselves from something – just like walking. Just as there are forward and backward reference points for walking to function, the brain requires reference points to effectively sense and manipulate the Time elements of the environment.

Our brains work by releasing cascades of neurotransmitters creating wave-like adhesions in Time. In effect mimicking the churn or movement that takes place within 4th-dimensional or quantum or sub- or supra-physical geometry.

Removing crucial bits of the brain leads to loss of adhesion and loss of memory abilities as highlighted by the well-documented case of H.M.’s brain. Based upon this case and subject to further study, it would strongly indicate the need for both sides of the brain to be functioning in order to “trap” or adhere or process Time similar to how hands and appendages grasp objects in 3D.

The CaMKII complex is crucial to it’s functioning as a mediator between us and aspects of the Time environment.

Reasoning or problem solving occurs when an organism has multiple churn events or nodes and results directly from the complexity of an organism’s sensory-feedback systems. We can predict problem-solving or consciousness based upon an organisms sensory capabilities and complexities free from any human-centered biases. Octopuses are an example of this phenomenon.

Synthesia is an important indicator of the various aspects of consciousness. Synthesia is the mixing of different sensory streams with each other, with people reporting to taste sound for instance. They also experience distortions of time during this state of mind. This occurs because Time is something we sense in the environment along with everything else we can sense.

One of the difficulties in examining this issue is the question of observing the observer – how in the world can one describe the mind/consciousness while using consciousness at the same time? It is not an impossible task.

Various biochemicals alter human consciousness into clearly different states, allowing us to observe these changes and make determinations based upon these experiences.

For example alcohol makes experiencing Time appear to go by quicker while cannabis appears to experience it slower; the minds Time reference/Churn rate is altered creating alternate states of consciousness as users of both substances and those observing them can attest.

In science we always look for the delta, the change in something, then observe/record that data and make conclusions based upon that data. By altering the brains naturally-evolved biochemistry we can in some ways observe the workings of the mind or consciousness.

Chemical, biochemical engineering is the technology we should develop to understand and harness whatever knowledge we can from this frontier of scientific exploration.

This topic has been one that has in the past puzzled me with a basic question: Are our brains a single, double, or is the brain composed of many nodes interacting with each other? Multiple nodes tie in properly with the abundant occurrence of the alpha-CaMKII holoenzyme as well as evolutionary history.

Let us take a look at this CaMKII molecule then explain how it can adhere to part of the Time environment.

Next Molecular Interface With Time

Previous The Molluscs Amongst Us