Let me briefly try to provide a more accurate description of the 4-D world/Time environment.

We’ve seen this little animated hypercube pop-in and out of itself and though it is not the actual process, it can be used to explain the phenomena.

Let’s look at the hypercube again:

This is not a complete representation of what the 4-D world ‘looks’ like but does allow us to understand the flow, or constant movement that is inherent to what we refer to as the Time structure of our environment.

This looks like it was created using a little digital trickery with one cube embedded within another that flow between each other. The important part is that everything is moving in 4-D always. While the above is a fairly good description for our limited abilities, we need to add a few things to make it more like the actual Churn events.

In the tryptich above we see the Node in different snapshots. ‘A’ could be considered the discrete phase, where it is in one of the those six basic forms inherent to 4-D geometry; ‘B’ is the Node deforming outward, interconnecting with adjacent Nodes; ‘C’ continues to deform back to the first form. And then all over again, and again and again etc.

However while it does interconnect with adjacent Nodes as in ‘B’, it too is composed of other Nodes. 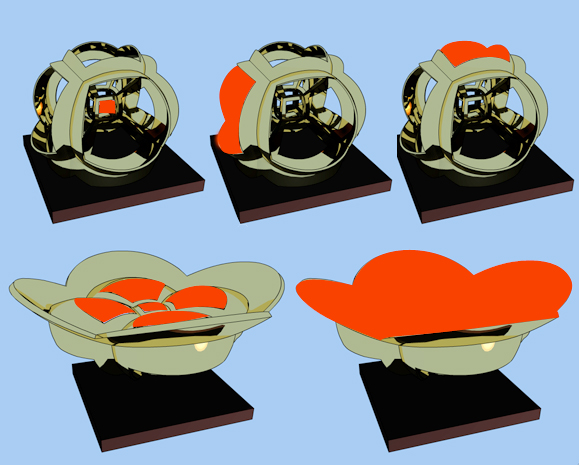 All the areas in orange-red or holes as we see them, are also composed of Nodes. So while the overall form deforms and forms again, other Nodes within the Node also do the same. In the above, the orange-red color is where another 4-D form like this ‘single’ Node is also behaving exactly as the Node.

In this way information, data can be mixed and referenced by another Churn event within the brain.

Different parts of the brain are different Nodes and they can all interact with each other in 4-D allowing the organism to function coherently.

Now imagine if there are many other multi-Node systems, there will be other Nodes all ‘around’ the one Node being adhered to by a CaMKII molecule. In order to effectively Churn back to the past to the present, there has to be persistent adhesion with past events.

By having high concentrations of CaMKII in neural tissue, shaped and folded upon itself, sections of the brain can adhere to an entire coherent region of the 4-D environment instead of a single Node event. This way not only can it bind to these intricate deformations but it also means if one or two or many more of the CaMKII molecules are degraded or destroyed in some way, there will be other Adhesion points with other CaMKII molecules in the same ‘region’ of Time.

As they all interconnect with each other via normal 4-D mechanics, the loss of one can be offset by another churn event within the same region. If say only one of the Nodes in this region is no longer adhering to CaMKII, another nearby CaMKII Node can ‘share’ at least some of the same information the degraded CaMKII no longer can.

This is not identical to the process but it does give an idea how simple 4-D geometry can deform into other Nodes.

Remember, this hypothesis/theory states that we are not storing the information within a hard-drive in our heads, but churning back to the past and then bringing that experience to the present. So the information referenced above is actually a waypoint our minds can Churn back to, to ‘relive’ or retrieve that experience for the organism.

Next Outcomes From This Idea